The American Right for Adequate Chair Width In Public & Private Places or TARAC WIPPP is a Washington, DC-based lobbying organization that fights for the right of obese Americans, or to be politically correct, “Americans with metabolic differences” to have the same access to chairs in public and private places that “standard” Americans enjoy. You hear very little talk about chairs today, which is a little suspicious, given that we all use them everyday – well, all of us who can, anyway.

It doesn’t take a genius to see the MASS weaponization of chairs that has unfolded in this country over these decades. Obese Americans have difficulty fitting into seats in airplanes, theaters, stadiums, schools, restaurants, cafes, cars, bars, amusement park rides, trains, and even life jackets.

The sole purpose of this cruel practice is to exclude Americans with metabolic differences from our society; to create a world that is so hellish for them that they dare not venture outside again. But our mission is to pass federal legislation to standardize the width of chairs so all Americans are welcome in the places they sit – both public and private.

The Weaponization of Chairs 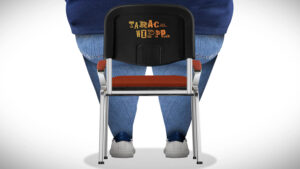 It’s no secret that Americans have been getting wider and heavier over the last few decades. But did you know that the average chair width in the United States has suspiciously remained the same, and in some states even decreased? It’s true. Both public and private places have shifted their burden of responsibility onto the hips of Americans – but why? It is a pervasive conspiracy with deep roots and sinister intent.

On the surface, it’s easy to chalk that up to corporate greed and profit margins. But the reality is far more insidious – there is an organized lynch mob in America coming for high-MASS Americans. No other group in history has been more ruthlessly targeted for discrimination than the group that stretches all the way from the far left to the far right – Americans with metabolic differences.

This virtual genocide is being carried out with a piece of furniture that once symbolized trust and equality; the chair. But at the hands of known and unknown public and private entities with a nod of encouragement from “standard” Americans, chairs have become the Weapons of MASS Discrimination or WMDs.

Last year, a woman in Iowa briefly gained national attention because she hadn’t even seen a chair in 22 years. Chairs were all around her, but hidden from view by her own adipose tissue. Her last words, before drowning herself in a vat of mayonnaise, were “I just want to sit down.”

Why do tragedies like this keep happening? And why do so many people diet and have their stomachs stapled? Is it their desire to look thinner, sweat less, or perhaps get ahead in their professional or personal lives?

No. The psychotic urge to destroy one’s own body through diet and exercise is driven by the fear of chairs, which is merely a psychological projection from a person who is chair-deprived. This condition is now common enough to have a name: Cathedraphobia, the fear of chairs.

Americans with metabolic differences have gone to extreme measures to change their bodies to fit into today’s unrealistic chairs. They’re cutting back on cupcakes, ice cream, lard, corn syrup, and even deep-fried hot dogs to mold themselves into unrealistic standards paraded in front of them everyday on TV and Instagram in the form of impossibly, dangerously thin and beautiful people. Not only has the suppression to consume hurt their psyches, it has hurt our economy.

Said one purveyor of deep-fried, sugar-rolled lard balls, “It’s almost like don’t nobody want to put nothin’ in their mouths no more.”

TOO FAT TO FLY?

So you think the weaponization of chairs only targets average, everyday obese Americans? Think again. Still-relatively-famous Hollywood, B-movie director Kevin Smith was forced off of a Southwest Airlines flight in the now-infamous news story, Too Fat To Fly. 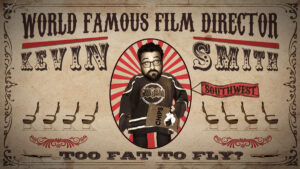 He wasn’t causing a disturbance. The flight was not overbooked. His only crime was not being able to fit his hips between the armrests so he could fasten his seatbelt. Last time we checked, having a body was not illegal in this country. But Smith’s self-expression collided mid-air with the FAA’s draconian regulations, grounding the plane until he made his exit, stage left.

The weaponization of chairs spares no one. It is carried out everyday with utmost precision and secrecy. And the intent is clear – to exclude Americans with metabolic disturbances from our society.

How can an oppressed people overcome? It is time for the wide of waist and big of bone to return to public and private places without shame. The time to act is NOW!

TARAC WIPPP is ready to fight for Americans with metabolic differences –the group that stretches from the far left to the far right. And you CAN make the difference. It’s time to stand up for sitting down.

Contact your local congressperson today and request legislation to make adequate chair width mandatory in ALL public and private places throughout the USA! Let the tyrants know that The Butt Stops Here!

There’s a revolt coming! Be part of the revolution! Say it loud, proud, and in a crowd…